Stories and myths have a tendency to capture the imagination and depending on the story, enliven the soul.  Because of this, the study of myth has been part of cultural and academic study for hundreds of years.  These studies have reflected the cultures that have done the studies more than anything else and understanding how these things have changed over the centuries can help frame our understanding of myth as much as the myths themselves.  As I continue my studies of mythology and folklore within ADF and Paganism, I have found that my understanding of myth and its relationship with the cultures that born them was not as solid as I thought it was and as I attempted to dive deeper into the work, I hit a point where I needed to go back to basics and reframe how I was looking at this topic.  In this article, I want to talk about how the history of mythological studies has changed and what some of the motivations are for these studies.  I also want to attempt to show an introductory framework to understand myth from a more modern perspective.

The Study of Myth: A Historical Perspective

When looking at the western fascination with mythology, the earliest evidence for this goes back to the Classical Greeks.  Debates among the various philosophical schools were common and there is a fair amount of documentation involving these discussions.  With the fall of the Roman Empire, we see these discussions disappear and replaced with Christian theological writings, but that began to change at the end of the Middle Ages (also known as the Post-Roman Era) and the beginning of the Renaissance Era.  It was during this time period that western culture was starting a revitalization of social and cultural developments.  The crusades had brought much wealth and Classical knowledge from the Middle East and social and governmental structures were starting to shift into the earliest stages of what is known as the nation-state.  This change was a major shift from the localized kingdoms that were scattered across Europe.  As part of this process, these budding nations needed to establish a unifying identity that people could gravitate towards and be assimilate into.  One of the major methods these new nations used was to look into their history, particularly ancient history, to help establish their new nationalism.  In countries like Greece and Italy, this was easy given the predominance of information they had with Hellenistic culture and the Roman Empire.  Other countries like Germany and Britain, which had always been seen as the homelands of ancient raiders and barbarians, needed to be more creative in this process.

These new nations put a lot of time into, not only the study of ancient mythology but also rewriting those myths (some more than others in many cases) to bring a cohesive image that expressed the cultural heritage of the people inhabiting the new nation.  These rewrites were done to make sure these stories expressed the values and ideologies of the new nations.  With these reworks, the national agenda always took precedent over historical authenticity.  We see this in various sources including the Brothers Grimm’s works in Germany.  One historical figure that was taken up in regards to national propagation during this time period is quite familiar among modern Neopagans in Europe and the Americas.  This figure is the druid.  As of when I am writing this article, our understanding of the druids is that they were priest that specialized in various roles among the ancient Celtic tribes that spanned from the British Isles and the Iberian peninsula to the eastern regions of Europe along the Danube River and the central regions of modern Turkey.   These tribes could be divided into regions and each region had its own variations in a common language, artwork, governmental structures, and warriorship.  The role of the religious specialist also had their regional variations but based on historical evidence, these specialists seemed to work to learn from each other and had more intermingling among themselves then possibly with other groups such as warrior bands.  They would specialize in different methods of divination, studies of the natural sciences, oversee community rituals to make sure the rites and sacrifices were properly performed, and they were judges and advisors to lords and chieftains.  Which hat a druid would wear would depend more on the needs of the local community than anything else, but they were a highly respected part of Celtic culture.

How the druids fell victim to these budding nationalisms is that with the rise of cultural predominance with the Mediterranean world in the 15th-16th centuries, countries in central and northern Europe knew that resources continued to flow to the Mediterranean region because of their associations with the Hellenistic history and with the connection to the Roman Empire (also the seat of the Catholic Church as located in Italy).  In order to help, not only establish themselves among the international scene but to help bring resources in their direction, they needed to shift international focus in their direction.  Germany, France, and Britain, not to mention others, actively worked to bring this shift about in their favor.  In the 1480s and 1490s, Rhenish patriots in Germany incorporated druids into the history of the Carmelite Order of Friars and announced that they had information showing that they were the decedents of the Celtic druid wisdom and teachings.  What they told people was that when Caesar came into central Europe to expand the empire, the druids fled to Germany to escape the expanding empire and they shared their wisdom and scientific knowledge with their German ancestors.  They also claimed that the teachings of the druids were a form of proto-monotheism learned from the ancient Hebrew people and that their teachings were consistent with Christianity and expanded on the work o the Bible.  The French got on board with this and attempted to “take the druids back” from the Germans and other countries competed with each other in order to be the dominant one to claim the druids as their own.  Over time the interest in the druids faded from popular culture as these cultures shifted to other methods to promote their growing new nations.  Despite this though, the popularity of druids in regards to nationalism and cultural heritage persisted in smaller groups, spreading to the British Isles and became highly popular in England in the 1700-1800s.  From this, we see the birth of the British Druid Orders and the Welsh Eisteddfod.

In addition to the study of myth being rooted in the propagation of nationalism, developments in the study of culture and anthropology brought their own ways to interpret mythology.  These frameworks almost always followed the popular trends of the time period.  Deists insisted that all myths (whether they came from ancient sources or from Christianity) were nothing more than superstitions, the rise in Indo-European language studies brought forth the practice of Philology which evolved and started new movements into comparative linguistic studies and linguistic anthropology.  In addition, we also have movements that looked to the nature of the stories themselves and tried to come up with a form of “universal proto-story”, which worked under the assumption that all myths in the world have an origin in some earlier evolution of stories going back to some original story.  Books such as The Hero’s Journey by Joseph Campbell and The Golden Brough by James Frazer are born out of this tradition.  Unfortunately, these movements always tried to incorporate Judaism and Christianity into the mix with the assumption that they were all related, despite lack of any evidence to say so, and in doing so used it as a method to legitimize these myths and stories to the western world.  There have been other movements in mythological and folklore studies over the years, but one thing that all of these methods did not do (or tried and did poorly on) was try to look at these myths within the cultural framework and structures they were born in.  They always looked at myths from the perspective of western culture with the assumption that the western worldview (usually rooted in Christianity) was the standard that all things were measured against.  It wasn’t until the later part of the 20th century and the beginning of the 21st century that we see a push to what some have called “de-colonialize” our understanding of culture and mythology around the world.

A Perspective on the Relationship Between Myth, Legends, and Folk Stories

Stepping away from the history of mythological studies and the motivations behind it, I want to look at some basic commonalities that have been seen when looking at mythology and folklore.  For starters, I just want to say that the relationship between various forms of cultural stories are muddled and can be complex.  In many cultures, there are no clear lines between the various forms of stories we see in regard to their substance.  We make certain assumptions based on characters in the stories as well as cross comparative themes that come up when studying them.   However, whether a particular story is seen as just a children’s story or considered one of the cultures most sacred tales will depend upon that specific culture and may not cross over to other cultures.  With that being said, modern mythological studies and cultural anthropology likes to categorize things to help give people a baseline to understand the subject matter in an academic environment.  In addition, these categories need to be functional towards these studies and people’s understanding of the subject matter.  So with that, this is a model of one such categorization that folklorists have been using that I have found helps me wrap my head around the study of mythology.  I have used it as a springboard to help me have a deeper understanding of how these tales relate to each other and their local cultures.

For those who have done any Indo-European studies, each one of these categories would appear to fall into George Dumezil’s Triplication model and folklorists admit that this model is based on what is seen historically in western culture.  It is completely possible that studies of Australian aboriginal myths and legends would have a different structure to it and different criteria per category.  Regardless, looking at these descriptions, one should immediately see that there are plenty of exceptions to these categories, even within western culture.  As I said earlier, there are no hard lines on how to categorize cultural stories and that is why in addition to these three basic categories, one can also include intermediate categories.  For this essay, these include:

So with the above categories, there is room for a lot of variation.  For me, the following diagram expresses how these aspects interact with each other: 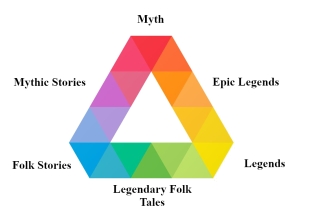 Remember, these categories are not hard positions, they are a gradient.  Where a particular story falls within the gradient will vary from story to story.  You will find stories that are more myth than legend and some that are more folktale then myth.  It is about understanding how these things relate to themselves, their home cultures, and how the people of these cultures find meaning in them.

Like I said, this is a basic introduction regarding the history of the study of myth in the west and a possible interpretation of how myth, legends, and tales relate to the cultures that they were born in.  As I continue to write about my Paganism and mythology in relation to Paganism, I will continue to reference this article.  I may also write up follow-up articles and updates to what I have presented here as I continue to apply it to my studies and come to a deeper understanding of the topic.